Using stereotypes to characterize people is dubious and not very accurate. However, most people would have no trouble recognising what nationality someone is (English, German, French, or Spanish) if I say that they are phlegmatic, pragmatic, chauvinistic, or fatalistic. Although these stereotypes show them as very different from each other, they’re all Europeans; but that doesn’t really matter, because even the concept of being European is seen differently from one country to another. In a nutshell, people like to feel different.

Like many French people, I’ve always considered France as one of the Latin countries, rather than the Saxon countries; especially when you consider the influence of Latin on the language, but also regarding the lifestyle and the mentality of French people. Still, I sometimes have to face some unexpected remarks when I talk to Spaniards. I hear them say: “France isn’t a Latin country because countries from the Mediterranean area are not like those of the North.” And they add: “Things are different this side of the Pyrenees. It’s not like in Europe.”

Isn’t Spain part of Europe then? I didn’t know that being a peninsula meant not belonging to the continent. However, rather than arguing about geography, the point people are trying to make is that they are from a different origin from me, a more southern one. And if I’m surprised when I hear this, it’s because I think I’m coming from a southern country myself, as far as the rest of Europe is concerned. When it comes to cultural differences, you must be aware of the existence of a thin but clear, straight but flexible, border that divides the North from the South.

Much to my dismay, I also heard: “Africa starts at the Pyrenees.” I see a kind of inferiority complex in this opinion. I guess they mean social behaviour, wealth, work organisation, or people’s sense of discipline, which aren’t as developed as in northern countries. And this complex is also fed by the ‘real’ European nations themselves. As everyone knows, if you can’t speak English properly, you’re not able to do international business; if you can’t have German-like accountancy, you’re bad at economy; if you don’t have French manners, you look like a country bumpkin, and so forth. These undermining clichés are accepted by most Spaniards.

Anyway, despite these stereotypes, Spaniards remain proud of being Spanish. One thing they’re particularly proud of is their lifestyle. In a Spaniard’s mind, if you don’t live the way they do, then you don’t really know how to enjoy life. “Se vive bien en España,” they keep repeating. And it’s true. The country’s climate is part of this quality of life, of course, but also the food they eat, their pace for doing the daily tasks, the friendly way they get along with people, the fiestas… And no matter how terrible their accent in English, how dodgy their economy, how noisy their manners, their way of living is the best. And it’s definitely not European. 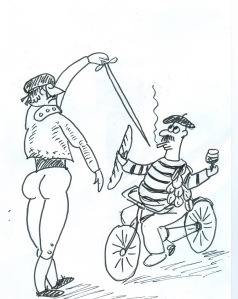